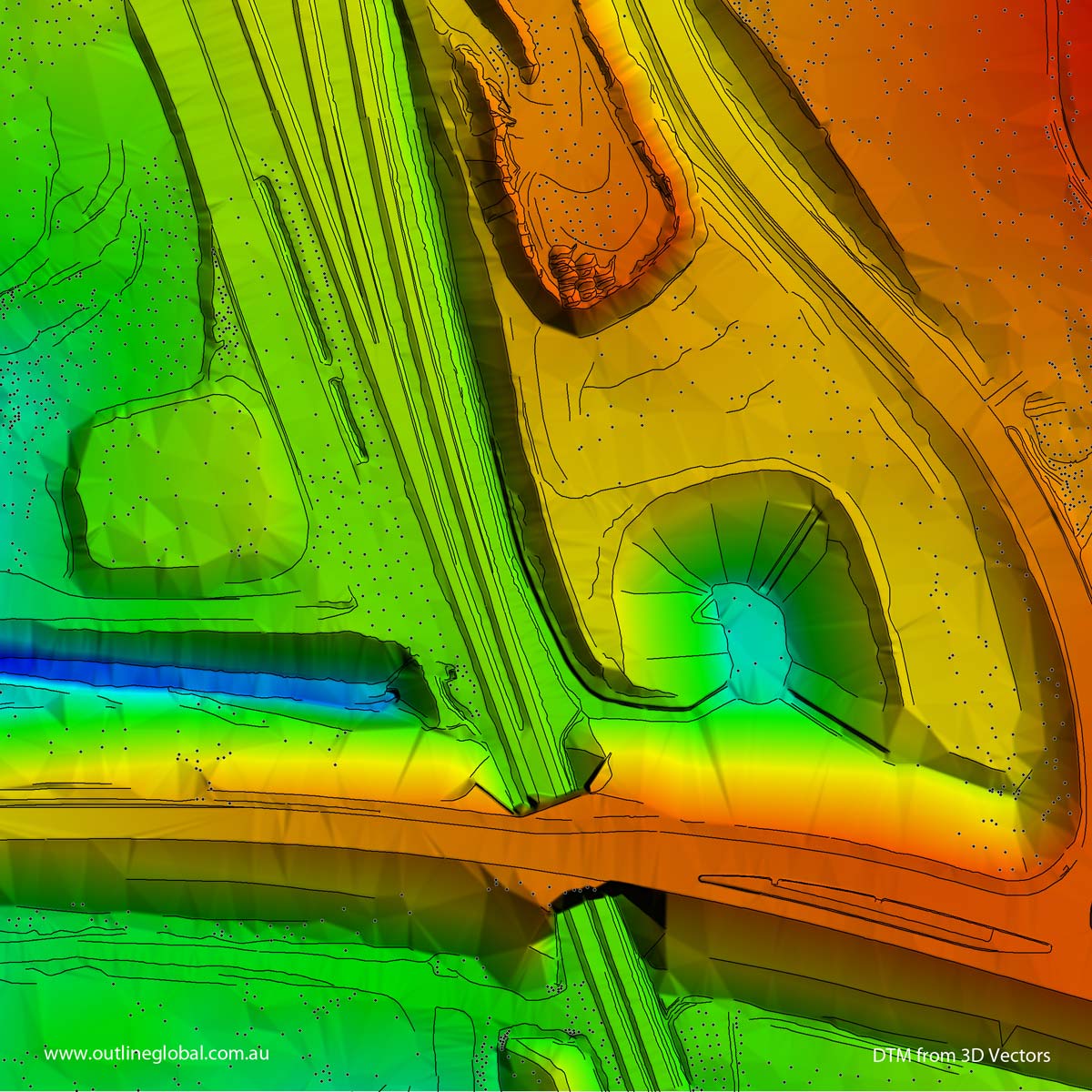 Digital Terrain Models (DTM) are a mathematical representation (model) of the ground surface and are used for a variety of applications such as flood analysis, line of sight analysis, stockpile volume calculation, forest change detection and landform change detection.

The elevation values (heights) used to generate a DTM for a given area of interest, can be captured/acquired using various survey methods including LiDAR surveys, aerial imagery surveys, satellite images or even terrestrial surveys. The survey method selected would typically depend on the project scale and accuracy/resolution requirement of the DTM and the application for which it would be used.

For medium scale (>10km2) to larger scale (>500km2) project areas, typically LiDAR or stereo aerial surveys are undertaken to generate a DTM. These two survey methods use very different approaches to capturing height value to produce a DTM but produce a DTM product with comparable accuracy specification and level of detail. These two survey methods are briefly described below;

LiDAR surveys is a form of 3D scanning using a high frequency laser rangefinder, whereby a LiDAR sensor outputs thousands of laser rays/pulses per second in a scanning pattern, rapidly sampling distances through its arc of movement. The height values of ground and above ground features can then be determined by measuring how long it takes for the emitted signal to return to the sensor in the aircraft.

Aerial survey captures overlapping stereo images, which are images captured in parallel flight lines that have side overlap. The basic theory of using stereo imagery to acquire DTM is to match the feature points according to the image overlaps (stereo correlation) and generate the 3D coordinates from these points, then further reconstruct a spatial stereo model and obtain fine 3D information of the ground. The level of detail and accuracy that can be achieved through stereo imagery is a function of the capture resolution of the imagery. Depending on the applications for which is DTM is to be used (and the accuracy requirements), the capture resolution can vary from high (<5cm) resolution to coarser resolution (>20cm resolution).

LiDAR is more effective in capturing ground elevation values in densely vegetated areas as the LIDAR pulse is able to penetrate through dense canopy cover to capture ground elevation values below the canopy. Photogrammetric methods to derive DTMs from stereo imagery, on the other hand, relies on ground surface being visible in multiple (stereo images) and not obscured by vegetation.  In areas where the ground surface is still visible and vegetation is more scattered, an accurate, detailed DTM can be readily produced using stereo photo methods.

Because metric aerial camera systems are typically less expensive than LiDAR scanners and can often cover larger swaths of ground per flightline, stereo imagery is usually the cheaper option for generating DTMs and more cost-effective means of generating DTMs in areas where dense, vegetation cover does not cover large extents of the project area. Furthermore, the high resolution RGB and NIR stereo imagery products are produced in addition to the DTMs without requiring separate acquisition.

Outline Global produces DTMs generated from high resolution stereo imagery and the demand for accurate DTMs is largely driven by demand for high accuracy, highly detailed DTMs for the mining industry. The DTMs are used for stockpile volume calculation and exploration purposes and environmental applications such as landform change detection (eg. erosion).

The initial elevation model generated from LiDAR and stereo imagery surveys is actually is a Digital Surface Model (DSM) which includes both ground surface and above ground features (such as building, vegetation, bridges and other infrastructure). Both survey methods rely on a series of complex filtering processes to remove the above ground features.

To generate an accurate, representative “bare” earth model of the ground surface (DTM) therefore relies on being able to effectively identify and filter out above ground features from the DSM without eroding or filtering out natural landforms or earth features. Once the DSM is filtering, the height values are interpolated for the no-data areas where the above ground features have been removed.

At Outline Global, considerable time and research has gone into developing machine learning algorithms to improve the efficiency and accuracy of the filtering process.

To get the most detail elevation, the initial DSM is generated at native/capture resolution. This is then re-sampled to 2X the capture resolution to produce detailed DTM with a regular gird (in which a unique elevation value is assigned to each pixel). Due to advances in computer processing capacity Outline Global can now produce DTMs at regular grid interval of 5-10cm (derived from 5cm stereo imagery) which can be used to monitor small changes landform features caused by erosion. It also allows for more accuracy estimates of stockpile volume.

The improved accuracy in airborne camera systems and IMU/GCP technology that also improved the accuracy of the elevation data, allowing for a more accurate estimation of height for a very detailed, high resolution grid of measured points.